From the Atlas Obscura Files 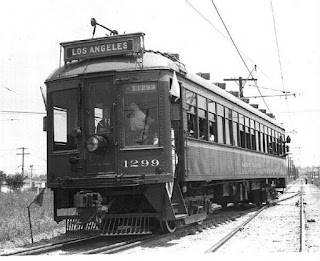 It was a balmy summer night in 1913 when the Venice Short Line Railroad loaded two of its three-car trolleys with weary Sunday beach-goers, full of fun and sun and ready to head back inland.
One train departed from Santa Monica at 8:53 P.M., the other from Venice at 8:55, both trains packed like sardines with weekend revelers. There are varying accounts of what happened next, but the end result was the same – 15 people lost their lives, and roughly 200 others were injured in a horrific accident that shook the small coastal towns of Venice and Santa Monica to their cores.

Some undisputed facts include that the first train, the 532, had stopped at the Vineyard junction, a few hundred feet shy of the station, most likely because there had been a break in the wire about 200 yards ahead. Realizing that they were parked on a curve on a downhill grade used for momentum, and that right behind them should be a non-stop special barreling around the bend at any time, the conductor rushed to the back of the train to alert the flagman, who ran down the track to signal the 874 that its path was blocked.

The is where the story gets muddled – some say the flagman didn't signal in time, others claim “hoodlums” on the rear car of the 532 began to play with the train whistle, and accidentally signaled the 874 that all was well. There are reports that the 874 just couldn't stop in time, and lax regulations on speed and timing between trains was to blame. No matter who was at fault, the results were catastrophic – The 874 slammed into the back of the stationary 532, plowing through the rear car and the 300 passengers inside.

In the wake of the collision, there was long, drawn-out chaos. Four cars were piled on top of each other, and the street lights had gone out, plunging the terrified survivors into darkness. The inaccessibility of the crash site kept rescuers from getting to the wounded for over two hours, and when they finally did reach them, they had to leave their emergency vehicles two blocks away, fight growing crowds of onlookers and desperate family members, and attempt to assess patients by candlelight.

With blame being placed on the heads of many who made mistakes, as well as policy that led to sloppy safety procedures, the officials of the Pacific Electric Railroad worked swiftly and thoroughly to ensure that the tragedy would never be repeated. After only three days, contracts to install blocking signals were drawn up, and unlike these days, when an investigation into an accident of this caliber would take years, the Vineyard Junction accident was under investigation in just 10 days.