From the Atlas Obscura Files

In 1928, the second-greatest loss-of-life disaster in California took 600 lives and then slipped gently into obscurity. 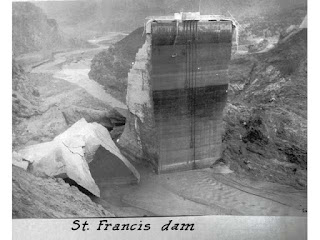 William Mulholland was the self-taught engineer who was responsible for the Los Angeles Water infrastructure and the construction of the Los Angeles Aqueduct. St. Francis Dam was a storage reservoir that was part of the much-disputed aqueduct, located in the San Francisquito Canyon about 40 miles north of Los Angeles proper.

Mulholland and his assistant inspected the dam and signed off on it on March 12, 1928. The dam had begun to show signs of stress, and there were a number of temperature and contraction cracks appearing, with a small amount of seeping occurring under the abutments. Concerned, Mulholland went out personally to take a look, and deemed the cracks to be of average levels and amounts for a dam of this size. 12 hours later, he was proven horribly wrong.

Two minutes before midnight on the very day Mulholland decided it was safe, St. Francis Dam collapsed. As transformers blew and 12.4 billion gallons of water barreled down the canyon, no one between the eastern canyon's drought-ridden hills and the Pacific Ocean had any idea that an inland tsunami was about to wash them away.

The dam keeper's cottage was probably first to go. Then the waters destroyed Powerhouse 2 and everyone inside. Emptying into the Santa Clara riverbed, the deadly wall of water headed for more populated ground, wiping out parts of modern-day Valencia and Newhall, crossing what is now Interstate 5 and completely washing away the town of Castaic Junction. The flood laid devastation to three more communities, Fillmore, Santa Paula, and Bardsdale, before dumping the bodies it had claimed on its journey into the Pacific. The flood waters had traveled 57 miles in 5 hours and 27 minutes.

Needless to say, Mulholland resigned, taking full responsibility, and the dam was not rebuilt. Ruins included the remains of the center of the structure, which earned the title "Tombstone". A few months after the catastrophe, an 18-year old named Lercy Parker perished when he fell from the Tombstone after a friend threw a dead rattlesnake at him as a prank. The Tombstone was demolished, and while ruins still remain, it is no more than a pile of unidentifiable rubble in a remote part of the canyon.
Posted by PosyFilledPockets