The Blackstar Turns Blue - Always Monsters and You 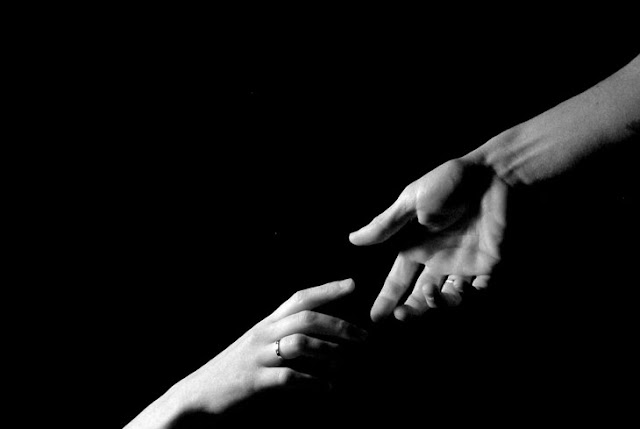 I know it's not about me.

David Bowie's death is profound, in general. Man Who Sold the World is one of my favorite songs of all time.

Several weeks ago, I dragged myself from another disappointing surgery consult to the couch of one of the most beloved owners of my heart, a friend who feels like home-the kind of home you'd like to be in when you die.

The baby doesn't sleep well when we travel, so I hadn't gotten much more than 3 hours a night, for several nights. Finding the time and energy to feed myself had been proving too much that day, and possibly the day before.

Nevertheless, if there's anything I've learned this year, it is that my time is far more precious than I ever imagined, and should be filled with the ones I have sometimes taken for granted, because they have always loved me, always just been there. They need me, and I have never needed them more.

I tell people things, but not always the truth. "I'm okay" I say. "Things are much better!" I say. "I'm in remission, so that's good." I say. But I don't lie to him. I don't say anything. I didn't have to tell him how tired I was, or how ravaged my spirit feels. That I am lost, and scared, and running on the fumes of a lifelong vitality that always seemed bottomless.

He knows me too well, and was gentle, didn't scold or ask too much. Let me ramble, bought me tacos, let the baby tug his beard. I knew he was sad, I felt his concern, he doesn't have to tell me things either. There's nothing I can do. I care in a far-away fashion, like loving through fog. There is just me, and my children. There is my loyal love struggling to cope-I am stronger than him, on the surface, and I am drowning. If I'm no longer the anchor...

My heart-holder left the house to pick up tacos, and before he left he handed me a tablet, and told me to "watch this" while he was gone. It was a music video. I smiled, trying to remember the last time I focused on an entire video, a complete song, a single sentence uttered by someone else. He left, and I pushed play in surrender because no one has ever gotten me to sit still for this sort of thing.

But him, only him.

Blackstar began to buzz, and Lynchian music poured into the room, and I fell into a trance in the rare quiet moment to myself. I closed my eyes, felt like I was drifting too far away, then opened them and blinked. Bowie's were bandaged, he was dying. I felt that. I knew it.

Not in real life, in the song. I felt him dying.

I was sleep deprived, too comfortable, unable to stop my emotional switch from flipping, and I cried softly. Because he was dying. Because I am dying. Because it's all so beautiful and sad. I needed sleep and food, I was sinking into a surreal place....

and then UPS knocked, and the spell was broken.

And not everything is about me.

And my heart-holder came in with tacos, and we chatted, and sipped bourbon, and played with the baby until in my exhausted stupor, I lost my grip while dipping him to the floor, and while he wasn't hurt, he was scared, and cried. I was shocked, so was my companion. Our horrified eyes met and I remember, just for a moment, I remember what almost was.

When Bowie died, I felt more than I have in a very long time. More than I did for a friend who tried to leave this world and landed in an eternal sleep instead. More than I felt for Paris, or Sandy Hook, or Amy or Lemmy. I felt sorrow like I had felt from his requiem. I felt the sorrow of my heart-holder from hours away. When he heard the news about Bowie. When he heard the news about me. I knew at that moment, long before it hit the newsfeeds, that I had witnessed Bowie's own, personal farewell to us, that I was put under a spell by a dying man. I knew it was a beautiful thing to do. I want to do it too, for the heart-holders I cherish, all of them.

And I was mournful, sunk.

David Bowie died of cancer. Not me.
I lived. I survived.

But I'm running. My mind is running, I work until I collapse, I talk so I can't listen, I create so I don't stop to observe. I'm running for my life. I'm running because if I stop I have to feel what happened to me, and what happened to my loved ones, and what could happen to my children if it catches me again. I'm running from the look on the face of my troubled partner, my gentle son, and my ever-faithful heart-holder when I woke up in the hospital and they were all around me. Their faces when it catches me again.

I didn't cry for Bowie because The Man Who Sold the World fills me with longing, or because of the gifts he bestowed.

But don't forget.
It caught a god. It can catch me.